Recently I purchased a raspberry pi 4 to see how it performs basic computer vision tasks. I largely followed this guide on building opencv https://www.learnopencv.com/install-opencv-4-on-raspberry-pi/

However, in the guide there are several missing dependencies on a fresh version of raspbian buster. There are also some apparent errors in the CMakeLists.txt file which other users already discovered. After patching these fixes and adding the needed missing dependencies, I now have opencv running on my pi. Here’s my complete script below.

IMPORTANT: You must READ the script, don’t just run it! For example, you should check the version of python you have at the time you run this script. When I ran it i was at python 3.7. Also, feel free to bump to a later version (or master) of opencv.

Oh, also during the numpy step it hung and i was too lazy to look into it. It didn’t seem to affect my ability to use opencv – so i didn’t go back and dig. My bad.

This is a predicate for a distributed password management system. At the end of this exercise you have a secure password manager for one device, but with a small step or two the full solution can be implemented.

At this point, it would be good to create a few folders. The nice thing to note is you don’t have to use qtpass for this – it can be a bit squirrley, Just open a command line prompt and cd into “password-store” – you can do “mkdir

Next step is to add git support, and create a secure git repo on a website. Then you’ll basically have a custom, secure, distributed password store!

Currently I am in the honeymoon phase with React. This is after a brief love affair with Angular. I think my relationship with React will last longer because it is just so much cooler than Angular… (nevermind when my ex says “that’s what you said about me after you ditched jQuery!” Everyone knows its impossible to ditch jQuery)

The other thing of note is how many stinkin’ development tools are born every year. I was just brushing up on open source ecommerce offerings last week and stumbled upon a dozen or so. Widdling this down by filtering out inactive projects (based on github commit graphs), I found a few that seemed like good candidates. Of course this led me to some of the underlying frameworks supporting these products: composer (php – ihk; I loathe anything relating to php), meteor, electrode (from walmart labs of all places!), hapi.js, etc. What are all these heretofore-unknown-but-now-pivitol-groundbreaking frameworks?

It never ceases to amaze me how much time is spent on doing, then re-doing frameworks and toolkits. Could we solve the worlds shortage of developer problem by passing some law to limit needless duplication of efforts in creating frameworks? Maybe if we linked excess framework creation to carbon emissions Bernie sanders could jump in and help.

Perhaps toolkits and frameworks are the only fitting artifacts that a developer can leave behind for posterity. All the application code written is usually for a company, and therefore kept closed source, will likely never see the light of day. What does any good developer do besides create abstractions?

As an aside I also found it amusing to see a similar trend with amazon – no longer just s3 and ec2, they have all kinds of petabyte scale storage (including one offering that involves driving a semi truck to your business to extract up to 100 petabytes of data), lambda, snowball, blah blah, etc. Not open source, but in the same vein of neverending innovation…

Blueapron is just plain awesome. Even if you don’t pay for it – the recipes are free! Here are a few of my all time favorites:

I am no blue apron salesman, but I do love the idea of freedom from tyranny – and blue apron frees you from the oppression of bland and boring food. Additionally it provides an exciting escape from the meat-centric, canned-food based recipes of your childhood. Go blueapron!

While working on my Masters at BYU I had a professor that did all his demonstrations in MATLAB. It was as if nobody had told him that they had invented other languages. Or he just really loved MATLAB.

Lately I’ve been doing a project where I’ve had to experience the joy of using MATLAB. As a numerical processing suite it definitely effective: concise, quick, easy. It is also quirky. I thought I’d log a few observations for posterity.

First, the editor has some nice things: autocomplete, lots of suggestions for writing more idiomatic MATLAB. For example:

Matlab has a ton of quirks:

Except for the editor, which is appalling, I actually find MATLAB quite usable. I wouldn’t claim it is superior to python, just different.

Recently I wanted to get a VPN connection from a phone to an openvpn server. The openvpn app only provides two or three options for getting your ovpn file: 1) use itunes, 2) go to a website in safari that has the .ovpn file, or 3) send via mail.

Option 1 was out since the phone was locked down enough to not permit me to transfer apps. Not sure why – likely just a policy of the phone (i dont own the phone).

Option 3 is less secure so I skipped that.

Option 2 is easy – I only had to make a few mods off what I found via Mr. Google:

I then pointed my browser at the .ovpn file, at which point safari recognizes that you can open it in openvpn. All worked marvellously thereafter.

Starter
I used the following sourdough recipe from King Arthur Flour. I struggled at first, but mainly because I wasn’t doing regular feedings every 12 hours. Once I did that I had a starter within four days. Also, I found that it was not critical to have unbleached flour. I got a vigorous starter using bleached flour.

Another note: for the first few days the starter really stunk. Then something changed and it started to smell great. I found that after I pulled a cup out for bread, I could just add another cup of flour and half cup of water (i do use filtered, not tap), then a week later I could revive the starter just fine.

Apparently if you are going to be away from your start for a long time you can just dry it out, save the chips. Unproven by me, but they say this method preserves the starter for eons. 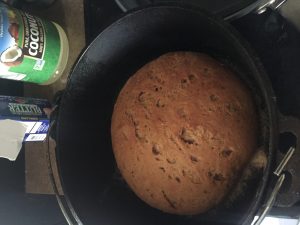 I whipped up some quick LED modules and my own power module using some proto boards and components I purchased from amazon. I haven’t branched out to more complicated module types, but these ones work well. I think each module cost ten cents or so, rather than the 10 dollars little bits charges.

Note that I put a small button to enable power from the module to the daughter cards. The main reason for this is to avoid wearing down the batteries.

Also, you can see I chose a 5-pin connector. Any module can plug into another module, or directly into a power module (which has two output connectors).

When I do this over again Ill make the following adjustments: 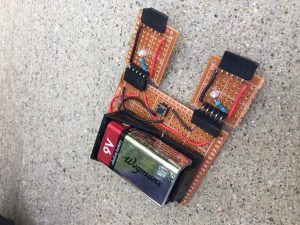 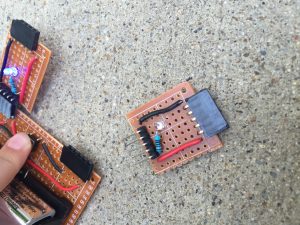 I initially had high hopes for the raspberry pi 3 and snapped up three of them. I hoped to see one take the place of my media center, another two for monitoring tasks. Unfortunately I became less than enthused about the pi for a media center as it has no good way to stream of youtube or vidangel. Additionally it couldn’t keep up with streaming some HD videos.

It has now been a few months since my initial disappointment and I decided to try out the new firmware and see if things got better.

The first tests i ran were using iperf. One raspberry pi, rpi1, was left behind at the old firmware. Another pi, rpi2, was upgraded to the latest.

Initial iperf test (iperf client running on my macbook, server on each raspberry pi – tests were run independently, on one raspberry pi at a time):

I also tried this with a parallel iperf test (iperf -c

Even on a udp iperf test (-u on the server, -b 50m on client) rpi1 gets 32 Mbits/sec, rpi2 gets about 39 Mbits/sec. In all cases there is a 5-9 Mbits/sec average higher increase with the new firmware. Pretty significant!

Note that if I run these same tests where my macbook is the client but a virtual machine on my network is the server, I see transfer rates in the 500 Mbit/sec range (the -P 10 test gave 513 Mbits/sec and the UDP test -b 1000m gave 627 Mbit/sec). This at least demonstrates that my infrastructure is more than capable of higher transfer rates. Thank goodness for 802.11ac routers!

It is also worth noting a few differences between the pi and vm tests. One difference is that the virtual machine is on a direct-cabled server, whereas both the raspberry pi and macbook are on wireless. Thus for the VM test, only one traversal of wifi is needed, whereas macbook to pi tests involve two traversals.

Now, if I upgrade rpi1 I would expect the numbers to be equal. Right…?

Strangely, no. Even after the upgrade I see rates in the 30Mbits/sec for rpi1. Digging deeper I found one minor discrepency between the two – i set aside 256 MB for gpu ram on rpi1, but only 128 MB on rpi2. Even after switching rpi1 to 128 MB, I still see the same numbers on both. I noticed I had a wireless keyboard adapter on the slower pi – but removing it didnt affect the transfer rates.

Another difference is that there is a raspberry pi camera on the faster pi – it would be interesting to see if that affects things.

I tried testing the ethernet interfaces and found performance across the pis identical.

At the moment I’m not sure how to account for the roughly 25% higher wifi performance on one pi over the other.