Last winter or so we decided to build bookshelves.   After much pondering we decided to make them built into the wall and have a window seat.   Here’s what we came up with (we never really got a good picture of it before leaving to the EC): 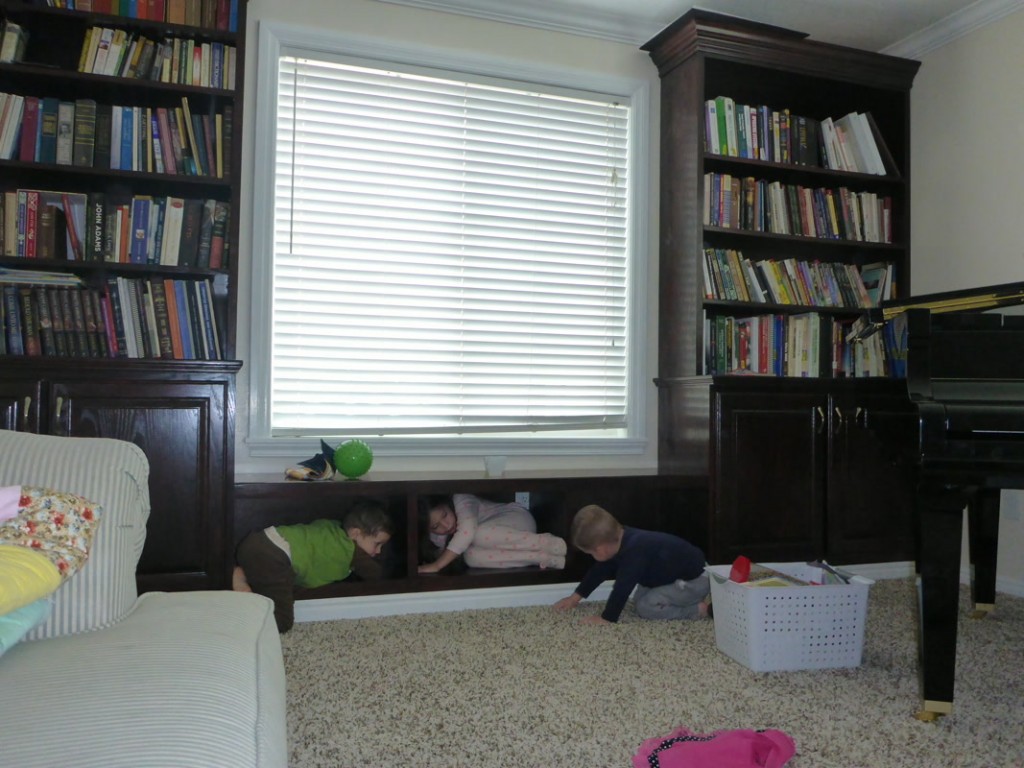 Since this was my first woodworking project there was a fair amount of ramup.  I dedicated myself to the study of Norm Abram, watching as many New Yankee Workshop episodes as the Internet would yield unto me.

The  process begin by pulling up the carpet and built a small platform of 2x4s.  This platform was needed to bring the shelves up high enough so the baseboard moulding could run under the shelves and connect up with the moulding on the connecting walls.

Essentially the carcass is the cabinet / bookshelf – it forms the entire structure.  Virtually everything else is cosmetic.  This surprised me because people charge a ton for furniture work, but essentially you are just building boxes.  How’s that for a deprecating simplification of cabinet making!

Another surprise has to do with the building material.  Whenever I hear people talk about furniture it is clear that quality and hardwood are synonymous.  Yet all the guidlines for building furniture involve plywood.  How could this be?  It turns out plywood is stronger – much stronger – than using plain old hardwood.  And far less expensive.  I think I got my sheets of plywood for around $60 each.  The bulk of the cabinets were built for around $500 total!

One thing you appreciate from watching Norm Abram and others is joinery.  There are all kinds of ways to bind two peices of wood together: pocket screws, dowels, rabbet, mortise and tenon, etc.  I chose to join the carcasses with double rabbet joints.  To do this I bought a Diablo Dado Kit  for the table saw.  I passed the plywood edges through to take away half the width on each side.  I then glued the sides, held them in place with pipe clamps, and screwed them together.  As Norm would often say, the screws are not really there to hold the thing together – just to keep it from moving while the glue dried.  I think they do add strength, but they’re not the main source.

On that note, may i say: wood glue is amazing stuff.  I used a variety of glues: basically Tightbond II and Gorilla Glue.  Im not sure if Tightbond III would have made a difference – in looking at the bond strength, Tightbond II and III seemed about equal.  Essentially you’d have to be the incredible hulk to separate two fully-cured bonded pieces of wood.  The Gorilla Glue is also a  good option, but I didn’t find it any better (but it was more expensive).

Another amazing tool: the table saw.   Its the main tool to use in woodworking.  A few table saw truths now resonate with me:

To complete the boxes I glued in some 1/4″ plywood into a rabbet I had made to the back of the boxes (before joining them).

That brings me to my two main regrets about the carcasses:

As can be seen below, I formed four carcases: 1) The left cabinet, with 1/3 of the window seat attached, 2) the left bookshelf, placed atop the left cabinet, 3) the right cabinet, and 4) the right bookshelf, also placed atop the right cabinet.  This left the middle section, which I finished after screwing the bookshelves to the pedestal.   To make that work, before bringing the caracses in I formed a rabbet on both the top and bottom edges of the window seat portions of the cabinet.  I also formed rabbets on two pieces of plywood.  I then slide one of the peices on the bottom of the middle area, and nailed it to the pedestal.  The other one went on top.

When this was all done I put another sheet of plywood on top of the window seat, to cover up the seams on the layer below.    When that was done I basically had the following: 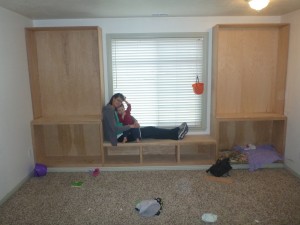 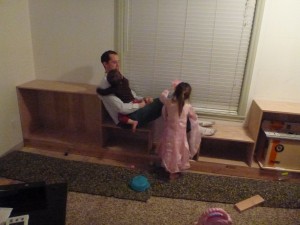 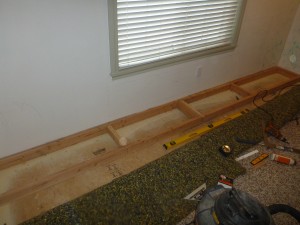 I think they call this the face plate.  Its the only part that is actually solid hardwood.  I chose 3/4″ white oak from home depot.  It was fairly expensive – I’d say I spent at least as much on the faceplate as all the caracases, if not more.

I joined the faceplate using mortise and tenons.  I am proud to say I made a single faceplate for the bottom half that went from the left side of the room to the right .

To form the joints I used the table saw to form the tenons.  I used a drill press to form the mortises.  One note on that:  I bought a fairly cheap drill press, but it worked very well.  It just took a long time.  I investigated using mortising drill bits, however these really didnt make a ton of sense – the idea is they chisle as you go down.  Well, maybe that makes sense, but in the end the drill worked just fine.

Of course I applied copious glue in joining the mortise and tenon joints.  I also bought some pipe clamps to hold them in place as they dried.  A note on that: it is really important to let the glue dry in a warm room.  I tried doing it in the cold garage and found it didn’t dry at all.  I guess you have to follow the manufacturers recommendations – who knew!

I also formed solid hardwood table tops for the bookshelves. Im not entirely sure why I did this.  Those things could hold a tank: two layers of 3/4″ plywood with a 3/4″ layer of hardwood.

The shelves are brain-dead easy.  I took plywood and cut some hardwood strips as a faceplate.  I then glued the faceplate to the hardwood, using a few finishing nails.  I filled the nail holes with putty.  Oh, and I did round the hardwood (before affixing it to the plywood) using some rounding bits on my router table.

As for the doors, this was the fancy part – the one that requires precision.  You have three elements to each door: stiles, rails, and panels.  The rails are the top part of the frame, the stiles are the sides, and the panel fills the middle.

For the panel I joined together three  6″ slabs of oak.  If I were Norm, and had his setup, I would have used a joiner to make sure the edges of the plywood were perfectly flat.  I don’t have joiner, but the stuff from Home Depot seemed pretty flat.  So I glued it together and clamped it tightly with some pipe clamps.

I then carefully measured, remeasured, marked the size of the panels.  It turns out you want the panel to float a bit inside of the rails/stiles.  You do this to allow for expansion in the panel.  The wood grain of the panel runs vertically.  Wood tends to expand with the grain, so the panels are supposed to be cut such that there is about 1/8″ wiggle room on each side.  Wood does not expand much against the grain, so only 1/16″ wiggle room is needed.

Cutting the panels wasn’t tricky, but it was a bit time consuming.  This is because I wanted to avoid ruining my router as it chomped through really thick wood with a big bit.  So i took two or three passes, each time getting closer and closer to the router bit.   I did end up burning the wood a bit on one panel, as can be seen below.

A note on router tables: I bought the Bench Dog router table from Amazon.  I was torn on this purchase – there were so many high quality expansive options.  For example, I would have loved to have one with a precise lift mechanism. In the end I think it would have saved time, but the cheap bench worked very well.  My only real regret with it was the size – it was hard to do these panels, as the bench couldnt support them.

Another note on improvising: The fun part of woodworking is being able to make anything.  Along the way, you have to make jigs and guides.  I think I made several for this project, including my own cross-cut sled for the table saw.  When i went to use the panel router, for example, i found it didn’t fit through the hole of the one that came with the router bench.  So i made my own!  It worked just fine.

There were lots of other little steps, including forming a two-layer crown moulding along the top, but within a few months I was ready to stain things.   I tried to sand everything well with a palm sander.  We then decided to use a darker stain, partly because it actually looked nice, partly because i wanted to cover up some of my mistakes.

This part was actually fairly easy – i just applied a lot of stain, then wiped it off.  I did that twice or so in most cases, except on the hardwood where i had to do it three times or so.

My main regret here is not protecting the carpet.  I should have covered it with a thick drop cloth.  But i didnt, and of course ended up getting the carpet in several places.

Another note on stain: to make it more even, some people recommend using a diluted laqueer or pre-stain treater.  That might have been a great idea, but it made things too light for my likes.  Maybe next time.

Once the stain was dry (i gave it the recommended week or two) I applied a varnish.  I did two layers almost everywhere – three or four layers on high-impact areas like the window seat. 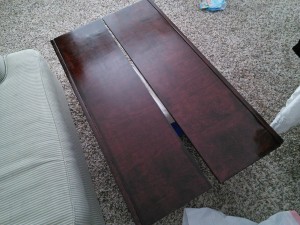 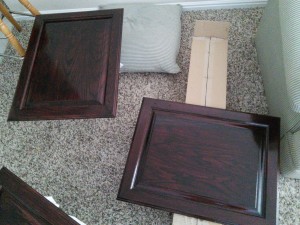 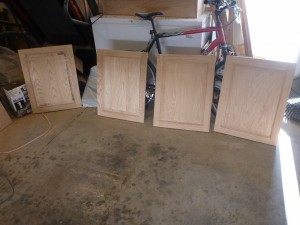 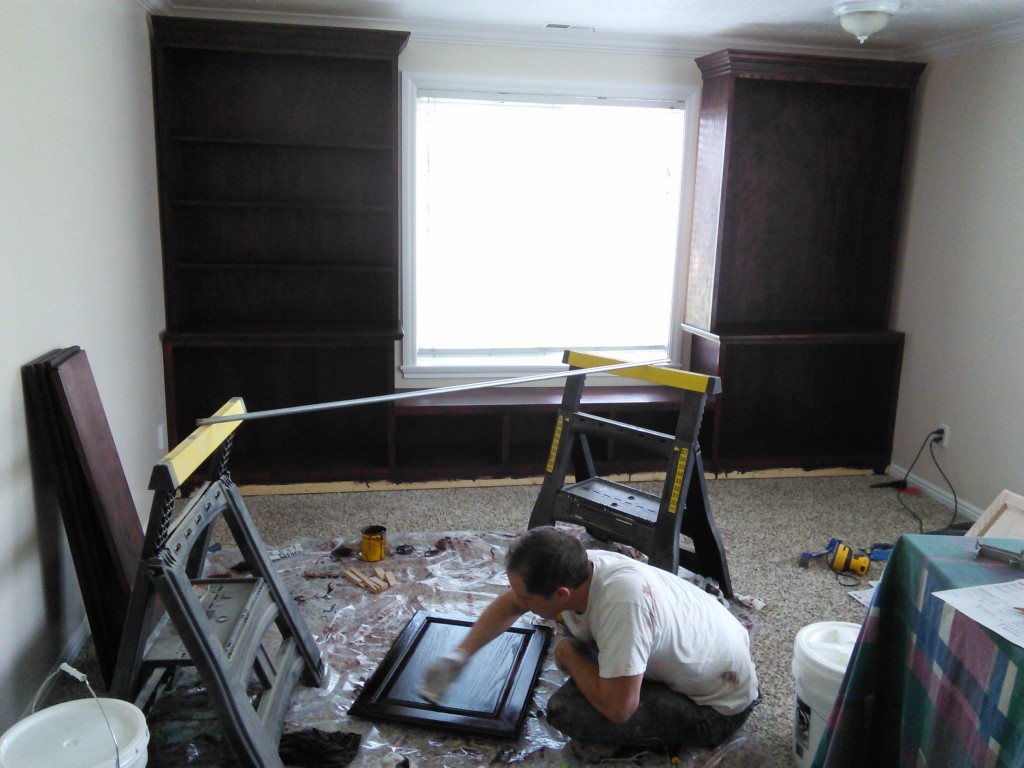 The first picture in this post is the best picture I have of the finished product.  Note there is some kind of a posterboard sitting atop the cabinet on the right – that’s not the crown moulding.  Pretty nice for a first timer!